For the first time ever, Australia’s aquatic industry was the focus of the annual Rapid Response Team (RRT) professional development activity. 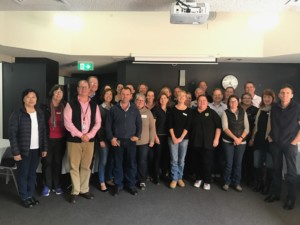 nique RRT activity, which took place from the 8 – 12 May, was hosted by the Tasmanian Department of Primary Industries, Parks, Water and Environment (DPIPWE) and Animal Health Australia (AHA). The activity scenario focused around a fictitious outbreak of abalone viral ganglioneuritis in Tasmania.

AHA’s Executive Manager, Emergency Disease Preparedness and Response Services, Dr Peter Dagg said he was excited about the RRT exploring an aquatic disease outbreak as the team, up to now, had only focused on Australia’s terrestrial livestock sector.

“If there is an emergency animal disease outbreak, the RRT’s job is to hit the ground running, undertaking functions such as planning, operations, logistics, public information, finance, administration and incident control to assist the affected jurisdiction manage the outbreak as efficiently as possible. Each year the RRT assemble in a different state or territory to continue their professional development and this time it was Tasmania’s turn, with the aquaculture sector under the microscope.” said Dr Dagg

DPIPWE Chief Veterinary Officer, Dr Rod Andrewartha said the 2017 exercise will help the RRT gain an understanding of the challenges in responding to a disease or pest event in an aquatic species and will enhance their understanding of Tasmanian biosecurity incident response structures.

“The 2017 RRT exercise was a professional development activity, affectionately named ‘Exercise Fintan’, which took place in Launceston. We had over 50 people from Australia’s Government departments of primary industries as well as key industry participation. Exercise Fintan allowed us to explore response arrangements and challenges in a biosecurity incident, and ensure we have best practices in place in the event of a real outbreak,” said Dr Andrewartha.

AHA and DPIPWE would like to thank all exercise participants as well as Business Tasmania for their contribution towards this important professional development exercise.