Australia is free of bovine spongiform encephalopathy (BSE) and scrapie. The World Organisation for Animal Health (OIE) has designated Australia as a ‘negligible risk’ status (the lowest risk).

The NTSESP supports Australian trade by:

AHA manages the NTSESP, and the project is planned and implemented through the National Advisory Committee, comprised of representatives from relevant livestock industries, the Australian Government, and state and territory animal health agencies.

Introduced in 1998, the NTSESP is a targeted component of Australia’s overall disease surveillance effort, which provides cost-effective information for assessing and managing risks associated with trade in animals and products, animal production efficiency and public health.

To maintain a continuous watch over the livestock disease profile so that unexpected changes can be identified, general surveillance activities include:

The NTSESP is complemented by targeted surveillance for neurological disease in all animal species with intensive follow-up investigations of cases involving unexplained neurological signs.

Intensive follow-up has uncovered a number of rare neurological conditions where a TSE has been ruled out. These investigations have shown that other conditions can result in signs that mimic those of TSEs, including:

These animal health conditions are of particular relevance to Australia because of their rarity, geographical remoteness or the unusual circumstances of their occurrence. Resolving the causes of these conditions gives additional confidence that Australia’s comprehensive approach to surveillance is detecting rare neurological diseases and ruling out TSEs.

Australia commenced active surveillance for BSE in 1990, which was modified in 1998 with the introduction of the NTSESP.

The NTSESP sampling design for BSE is based on the recommendations in the OIE Terrestrial Animal Health Code, 2015 Edition. Australia is a country assessed by the OIE as BSE Negligible Risk and therefore should implement OIE Type B surveillance.

The application of OIE Type B surveillance is designed to allow the detection of at least one BSE case per 50,000 in the adult cattle population at a confidence level of 95%. Australia’s target is to achieve a minimum of 150,000 surveillance points during a 7-year moving window.

Our program involves the detailed examination of clinically consistent cattle collected at points throughout the production chain, as well as examining 300 brains from fallen or casualty stock each year to satisfy the OIE Code recommendations and to aid in maintaining accreditation for the Bio-Rad TSE rapid test.

Use of histopathology as the screening test for clinically consistent cattle is followed up with confirmatory testing at CSIRO’s Australian Animal Health Laboratory (AAHL) using a range of methods where required.

Samples (entire brain and other parts) are submitted to laboratories around Australia for TSE testing, and differential diagnosis can be explored.

See Figure 1 (below) for a summary of the program’s specimen and information flows.

The NTSESP scrapie sampling design is consistent with OIE’s recommendations and based on detecting scrapie with a confidence level of 99% if it comprised 1% of sheep neurological cases.

Assuming there are about 80 million sheep in Australia and that 50 million of these would be over 18 months of age, then the reference population comprises 5000 expected neurological cases from this group. This results in a recommendation to examine a minimum of 438 eligible neurological cases each year, assuming perfect sensitivity and specificity of the diagnostic system.

Assuming that neurological cases in sheep are uniformly distributed throughout the sheep population in Australia, then the sampling fraction is calculated every year using each state’s sheep population.

While scrapie can occur in both sheep and goats, the NTSESP only applies to sheep because scrapie in goats would only be seen in Australia as a ‘spill-over infection’ from sheep.

Samples (entire brain and other tissues) are submitted to laboratories around Australia for TSE testing, and differential diagnosis can be explored. Use of histopathology as the screening test is followed up with confirmatory testing at AAHL using a range of methods where required. 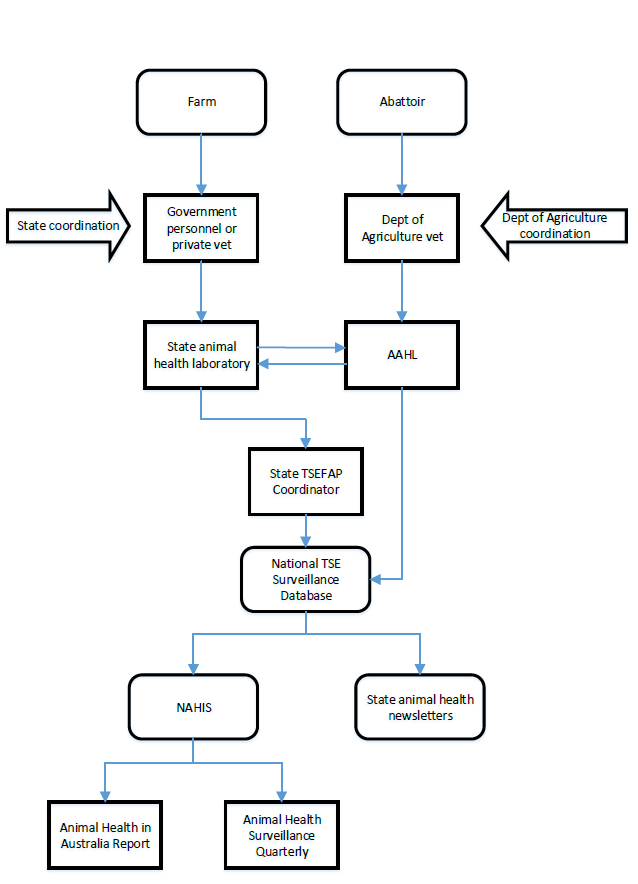